In today's post, I'll be sharing my experience with making roti prata at home. Before that, let me just share with you my memories of homemade roti prata when I was growing up.
Back in the days, frozen ready-made prata was non-existent. So there were two ways we could enjoy them, we either bought the freshly-fried prata from the coffee shop or we made them at home. Since eating out was not a norm, it was quite usual for many mothers to make prata at home, including my mum. Like me, anybody from my generation would have likely experienced making prata at home. Even my husband remembers helping his mum to knead the prata dough... 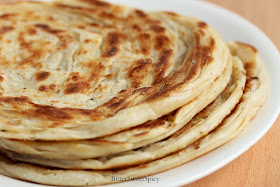 My mother even went one step further. She would add mutton briyani oil (more like briyani spread) to the  prata dough before stretching it. So the prata would have mutton briyani flavour! So yummy!! If you are wondering where the briyani spread comes from, it's actually the oil that floats when preparing mutton briyani dish (not the rice). By the way, my family often cooked Mutton Briyani Rice for thanksgiving feasts, that's where all the oil came from. My mom would  scoop up the oil & keep it. It would solidify into a spread. You must be thinking of  the cholesterol level..... well, back then, the word 'cholesterol' was not part of a layman's vocabulary, probably strictly used by the medical staff only! And, I didn't know anybody who had stroke.... 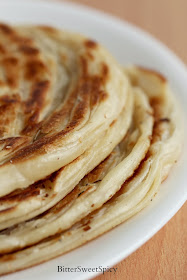 Ok, enough with the nostalgia.... As usual, my mum never measured her ingredients, so I don't have her recipe. So I decided to start out with a tried-&-tested recipe, one by Singapore's very own food blogger, Dr Leslie Tay of ieatishootipost. Dr Tay not only shared his recipe, he also shared his research on the ingredients & the steps involved in making the prata. Do read his post.
I'm very happy with the pratas that I made. They looked & tasted very good. The dough was very easy to handle & none of my stretched dough was torn. However,  I thought my pratas were slightly dry. So the next time I make them, I must remember not to stinge on the oil! 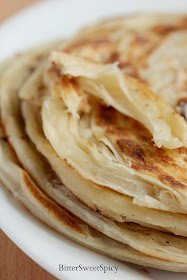 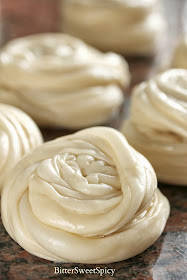 - I love this picture.


2. In a mixing bowl, combine the flour and liquid & beat at speed 1 (low) using the paddle attachment for 1 minute. You'll get a shaggy mess. Rest for 20 minutes. 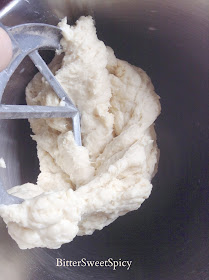 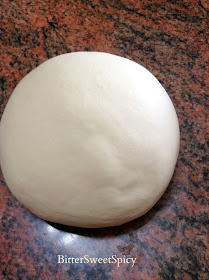 4. Divide the dough using a cutter into ten 100g portions. Shape each piece of dough into a ball. 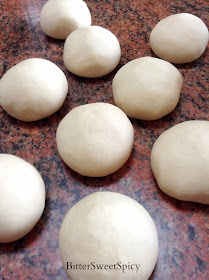 5. Coat the dough with oil & place them in a container. I placed mine in a muffin pan, as suggested by Dr Tay. Cover the pan with a plastic & leave it in the fridge overnight. 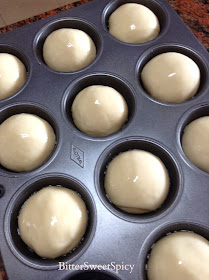 6. Place a dough ball on a working table. 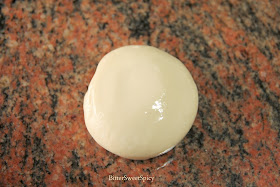 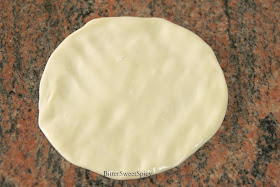 8. Flip or stretch out the dough as thin & even as possible, without tearing it. Brush some oil onto the stretched dough. 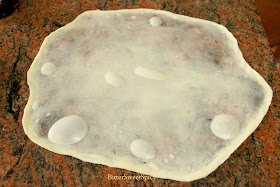 9. Fold or gather the stretched dough to form a long piece as shown below. Brush some oil. 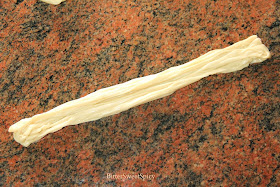 10. Starting from both ends, turn them to form an S shape dough as shown below. Brush some oil. 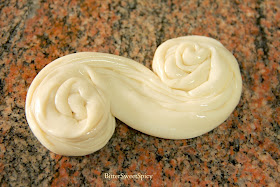 11. Pick up one part of the S-shaped dough & place it over the other part to form a bun-shaped dough as shown below. 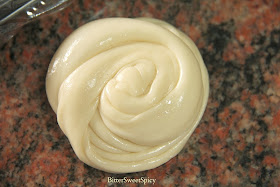 12. Using your hand, flatten the dough to form a flat & even uncooked prata. 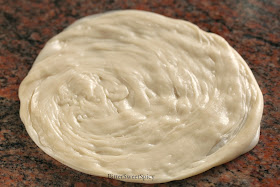 13. Heat up a flat pan & add some oil. Then fry the prata on medium fire until it turns golden brown. 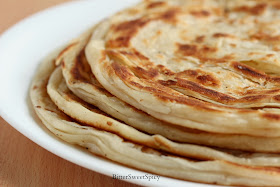 I hope this tutorial will be helpful to those who want to embark on their prata-making journey. Good luck!
Faeez at 12:30
Share