Kenwood sevice centre called yesterday to inform me that my mixer could be repaired & it would cost me $105. Hurray! That's less than 10% of the price of a new similar set! But more important, I get to keep my 30-year-old Kenwood mixer! When you have something for that long, it sure   has some sentimental value... don't you think? Besides, it's a hand-me-down from my mum. In fact,  I was the only one who has been using the machine ever since my mum bought it. This is only the second time I've sent it for repair. Even then, it's because it had a bad fall... . It happened about two weeks ago when I was mixing the dough for my cinnamon roll. It's normal for the machine to move about when mixing dough. But I didn't learn my lesson .... as I turned my back to wash my hands, suddenly, ....the loud thud! I was dumb with disbelief.  I did it again! Yup, that was the second time it fell from the cabinet top! Previously, the machine was still working after the fall. But this time, it went kaput. Anyway, I'm happy it's ready for collection, but I don't think I'm going to use it to mix any bread dough again. Don't think I want to take the chance. 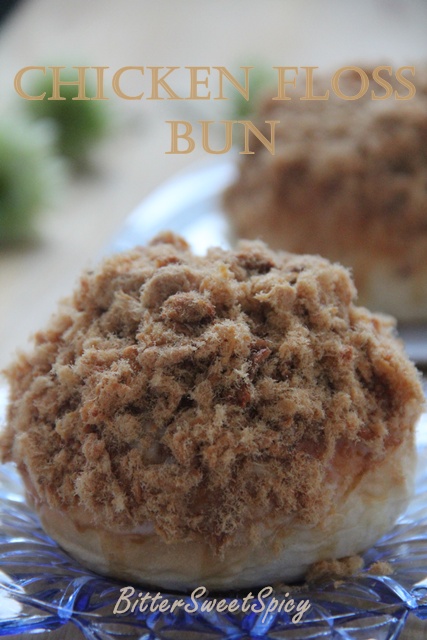 I sent the mixer on Saturday, so on Sunday, I mixed the dough for my chicken floss buns using my bread machine. This time I used a recipe by Alex Goh. The method to prepare the dough is quite different from the ones that I've ever tried before. We've heard of the Tanzhong method. Now we have the gelatinized method. You can refer to Miss B's blog  for more details about this method. 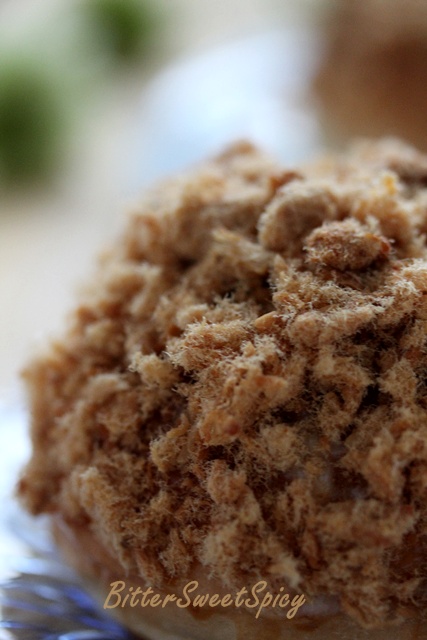 Chicken Floss Buns
Recipe by Alex Goh of Magic Bread & The World of Bread.
Source: Everybody Eats Well in Flanders.

INGREDIENTS A - this is for the scalded or gelatinized dough.
100g bread flour
70g boiling water 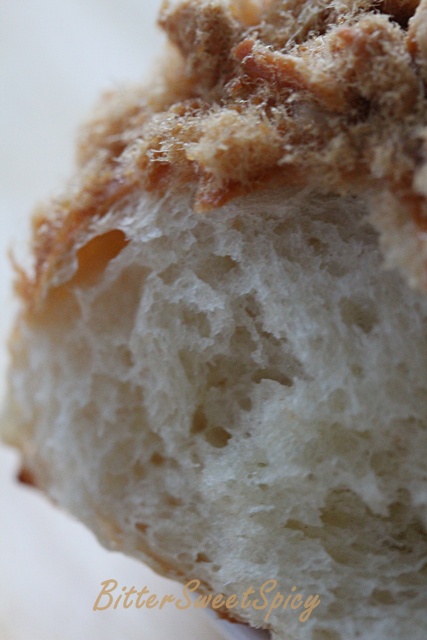 Method:
PS:  I used my breadmaker to mix the dough. I threw in all ingredients B & C into the bowl, except salt. Once a dough is formed, I threw in the butter. Once well mixed, I added the salt. (Salt has a retarding effect on the yeast, so always add it last whenever mixing bread dough. We practised this during the bread-making course at BITC.)

Hello Faeez
I loves eating thisbchicken floss buns but yet to bake it at home. Now that I have this recipe from yours I shall make it one day. Isn't it lucky you that your mixer still able to get going....that the good thing of good brand.

This is indeed a good recipe. The buns turned out soft & yummy! Yes, I believe in good brands. But now many machines are not made in country of origin of the brands. So, they are not as goood as the old machines :(

Salam sis faeez... May i know where can i get the halal chicken floss in singapore?

Waa'laikumsalam. Nazia, I used the chicken floss i bought from Batam. I hv no idea where to find it in sg. I'm wondering too... Sorry, can't help you.