This recipe was given to me about 30 years ago by my cousin who attended a class. The date written on the recipe is 19.4.81. I used to make these steamed cakes often. I remember making these for my cousins' weddings as part of the gifts between the groom & the bride (a.k.a. hantaran). 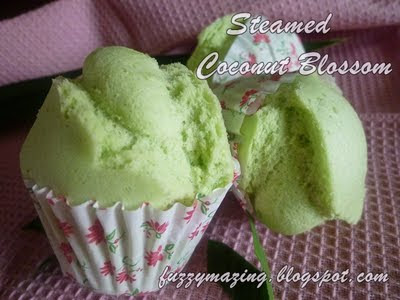 This is my second time making these during Ramadhan. The ones I made last week rose but did not open up. I think that's because I used Hong Kong flour (a superfined flour) instead of Softasilk flour as stated in the recipe. Softasilk flour is not as widely available as it used to be. I managed to get it from The Market Place at Paragon on Saturday. I think only Cold Storage imports the flour. Another advantage of using Softasilk flour is  it produced a softer texture. 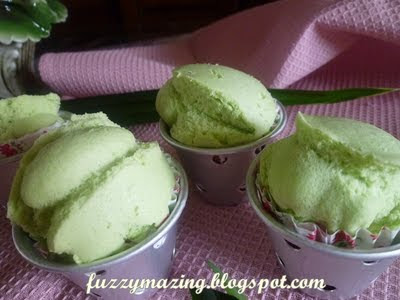 Today, my coconut blossoms opened up but not the way I like them. In fact, they opened up into some obscene shapes which I managed to hide in my pictures. Maybe the steamer I used was too small...that's the only reason I can think of. So the next time I make these, I'm going to use my big steamer. We'll see what happens.... Anyway, this recipe is worth trying, whatever shapes they turn out, because they are so delicious...my husband just can't stop eating them! 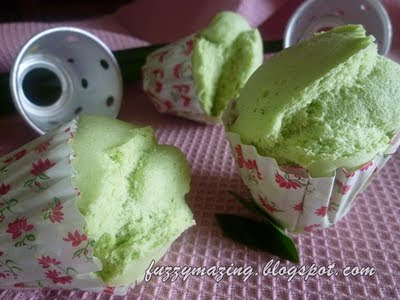 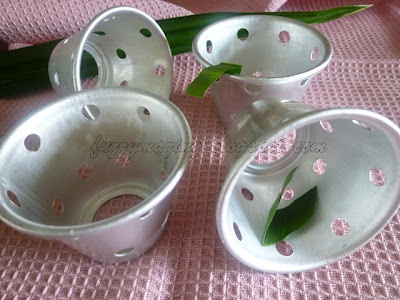 how long can this blossoms last after making?

Jess,
Thanks for dropping by.
They can last for a few days in the fridge. Or just freeze them & they last for months. Either way, just resteam them before serving.

Would you be able to share where you bought the metal cupcake holders which you used to make this(the metal holders with holes in them)?

Can you share where you bought those metal cupcake holders with holes?

Anonymous & Cheryl,
I bought them from a neighbourhood store in Tampines, the shop that sells household stuff. Recently, I also saw the plastic ones at Sun Lik on Seah Street (near Raffles Hotel).
Hope this info helps :)