I  made   Talam Suji last Saturday. Love eating Talam Suji but made it only once before. Recently,  when I saw it on Yatie's Sinar Kehidupanku,   I was tempted to make it once again. This recipe was shared by  Bdaria from  Jurnal resepi bdaria. which she got from a class conducted by the famous Malaysian Chef Asmah. 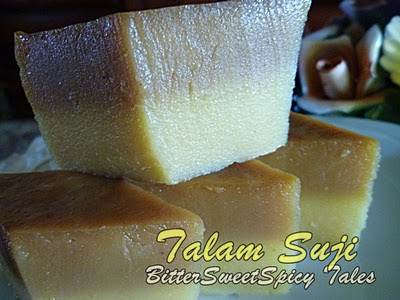 Unfortunately, as you can see, my Talam Suji does not look as tempting as the ones made by Yatie & Bdaria. Mind is rather pale. When I added yellow colouring to the bottom mixture, I thought it looked bright enough but when it's cooked, it looked pale. Then, I wanted to add brown colouring for the top layer but when I tried to pour the colouring, I realized it had hardened!
This kuih is quite easy to cut as it is not too soft. It's not hard either. The sweetness  level is just nice.... I like it. However, I find the kuih not rich enough. So, the next time I make this & if  I'm using fresh coconut milk, I need to increase it & adjust the water level accordingly. One more thing, I used the Prima brand of semolina. I realize it is too fine. As a result, the bottom level of the kuih lacks the granular texture. Apparently, there are other brands that carry coarser semolina......so I need to bear that in mind. 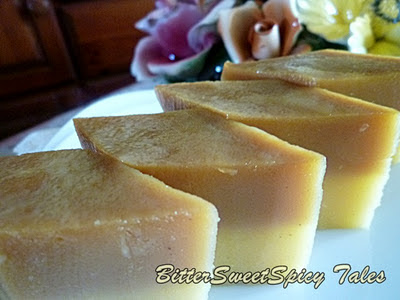