Banana fritters (jemput-jemput pisang in Malay) is one traditional kuih I've made many times.  I always made them without referring to any recipes. I'm sure many of you do that too. The fritters I normally made  are the type that have lots of banana, sometimes contains too much sugar so much so the fritters stick to the frying pan and they also puff up when they are hot but flatten once they've cooled down. That's the home-made version. I also like the ones sold at the food stalls. The problem with them is they are often very hard & lack the banana taste. Obviously too much flour & too little banana are added. So I've developed my own version of the stall-bought jemput-jemput pisang. 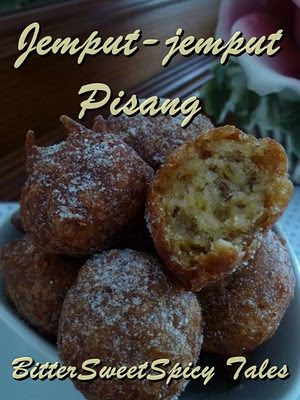 But as I was typing the recipe, I realized I had a problem. One of the ingredients used is 'potas',  a leavening agent. But if anyone were to ask me what it is, I wouldn't know what to say except that it is a raising agent & you can buy it from the provision shop. I once asked my cousin who runs a provision shop what potas was & if it was baking soda. He couldn't tell me exactly what it was but was sure it was not baking soda. His argument was that potas is the essential ingredient for making jeneket but replacing it with baking soda will not produce the authentic jeneket texture. 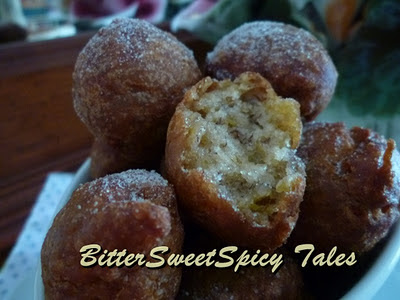 So I did some research on the internet. Potash or pearlash, not potas, is actually potassium carbonate used as a leavening agent mainly in Asia & when making German gingerbread. However, the major use of potash is in the production of fertilizer. Now I know........ In Singapore, you may buy potash from our neighbourhood provision shops & ask for 'potas', not 'potash' with American or English accent because the shopkeeper may not understand you. Of course, you can use baking soda instead. 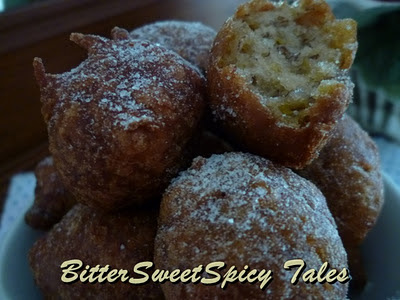 Method:
Note: The batter is not very thick. But once you drop it into the oil, the fritter will puff up into a ball.


Assalam walaikum wa rahmatulahi wa barakatuhu faeez,
I wanted to try but I do not know what's potash?
Can u kindly enlighten me.
Take u
Jam

Wa'alakum salam wa rahmatullahi wa barakatu Jamila. 'Potas' is the Malay pronunciation. It's a raising agent in white powder form, just like baking powder. If u are in Singapore, u can get it from any mamak or malay provision shop. If u can't get it, then u can just use bicarbonate of soda, also called baking soda. Hope this explanation helps. Salam Ramadhan. :)

May I know specifically where I can get 'Potas'? Do you have any picture how the packaging looks like? I need help in this as I've been searching high and low for it. Thanks!

Hi Adrian,
It looks exactly like baking powder or baking soda, usually packed in a small clear plastic by the shopkeeper. In Singapore, you can get it from the stalls run by the Indians or Malays. If you can't find it, just use baking soda.