Yesterday, I posted my Satay Buns entry.  This morning, I'm posting another satay-based finger food, Satay Pau. I used the same satay filling recipe & the dough recipe was one which I got from a weekend class more than ten years ago. I've not used this recipe for many years. At first, I wanted to try the recipe used by Victoria, but hers involves 3 days of preparation. For me, that really needs a lot of planning. So I decided to use this recipe which just required 2 days of preparation. Even then, I had to throw the first starter dough after it was left to ferment for more than 24 hours as I had to make an unscheduled trip to Johor to attend my hubby's uncle's funeral. 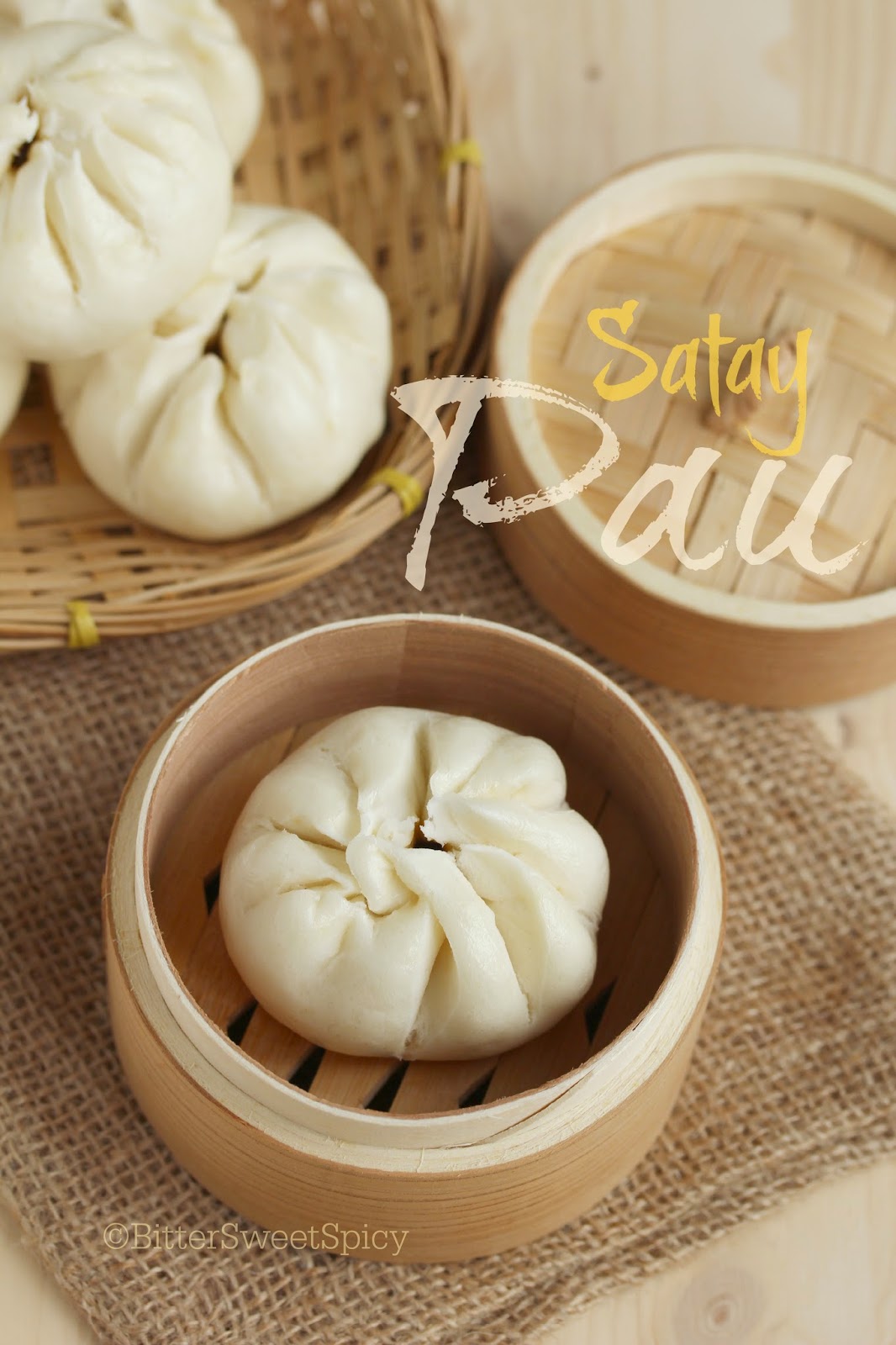 The idea to use satay filling came after eating satay pau I bought in Malaysia recently. I love the combination, but the satay filling was too sweet to my liking. I know satay is supposed to taste sweet, but that was just too sweet. For this homemade pau, I decided to use my mum's satay recipe. This time, the filling is more moist than the one I made for my satay buns after adding some cornflour & water mixture. The dough is good too. The pau is soft & fluffy although denser than the commercial ones. Still, I like it a lot. The next pau recipe I'm going to try will be the one Victoria used, with chicken filling, of course. 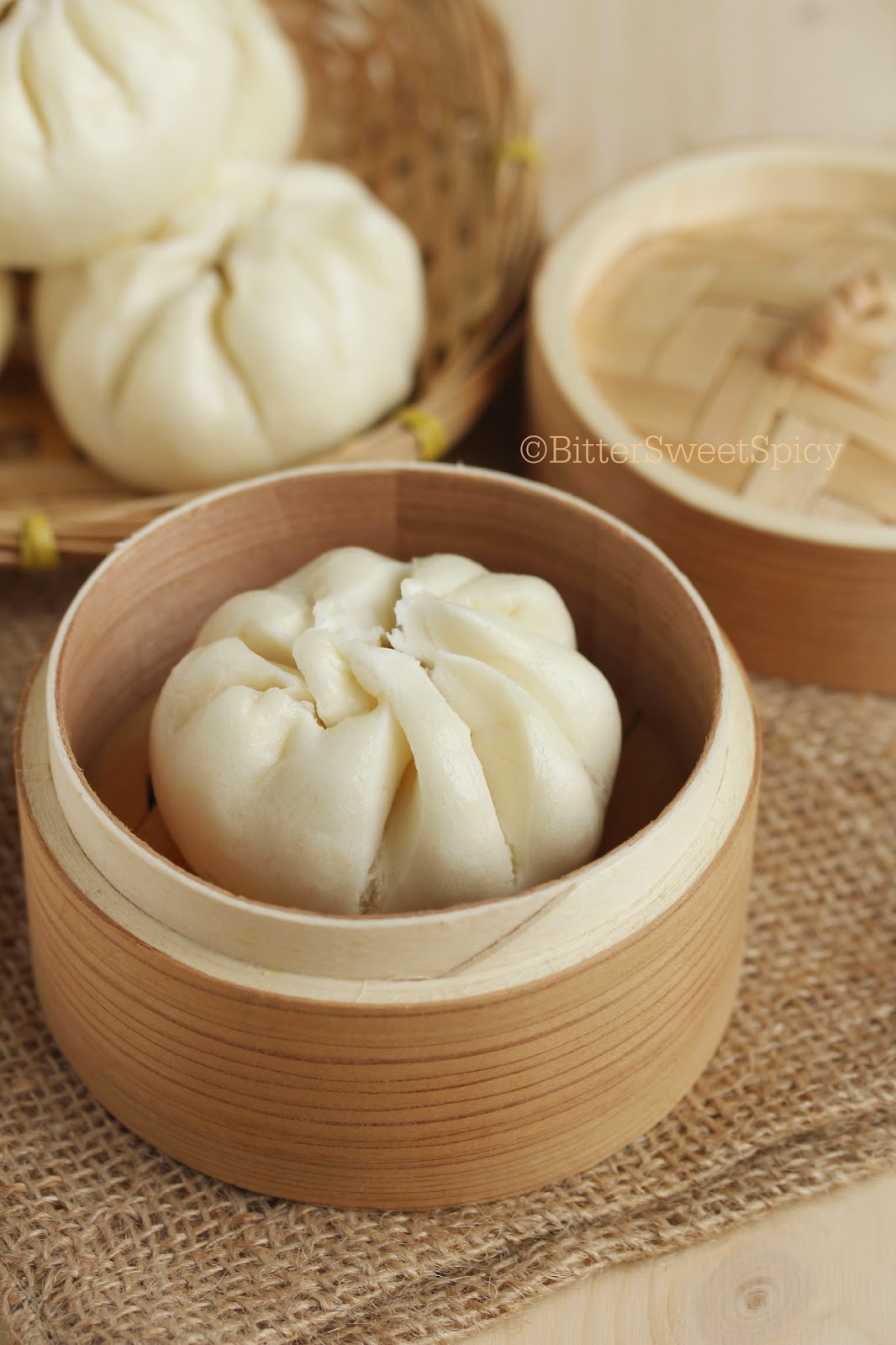 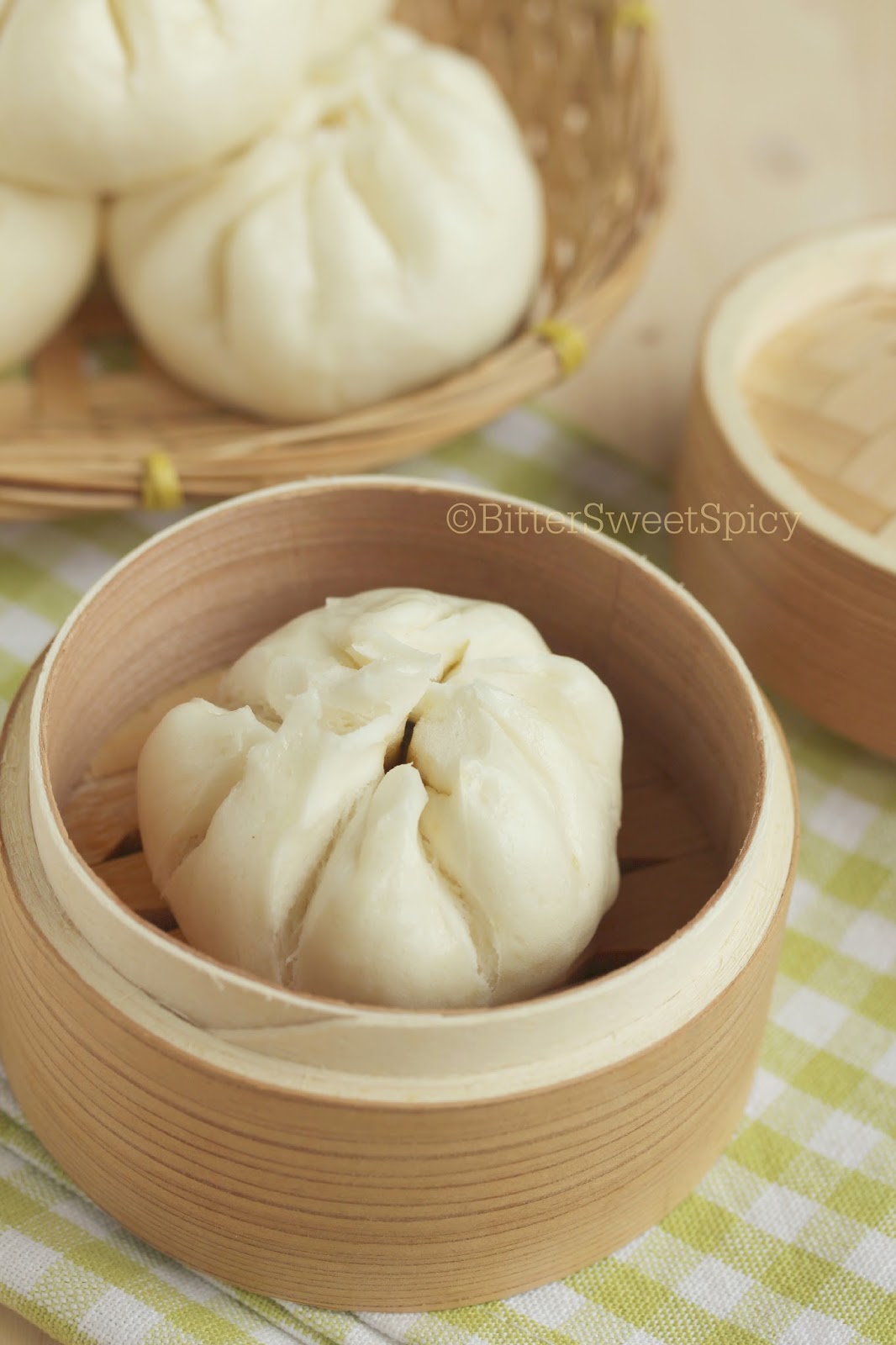 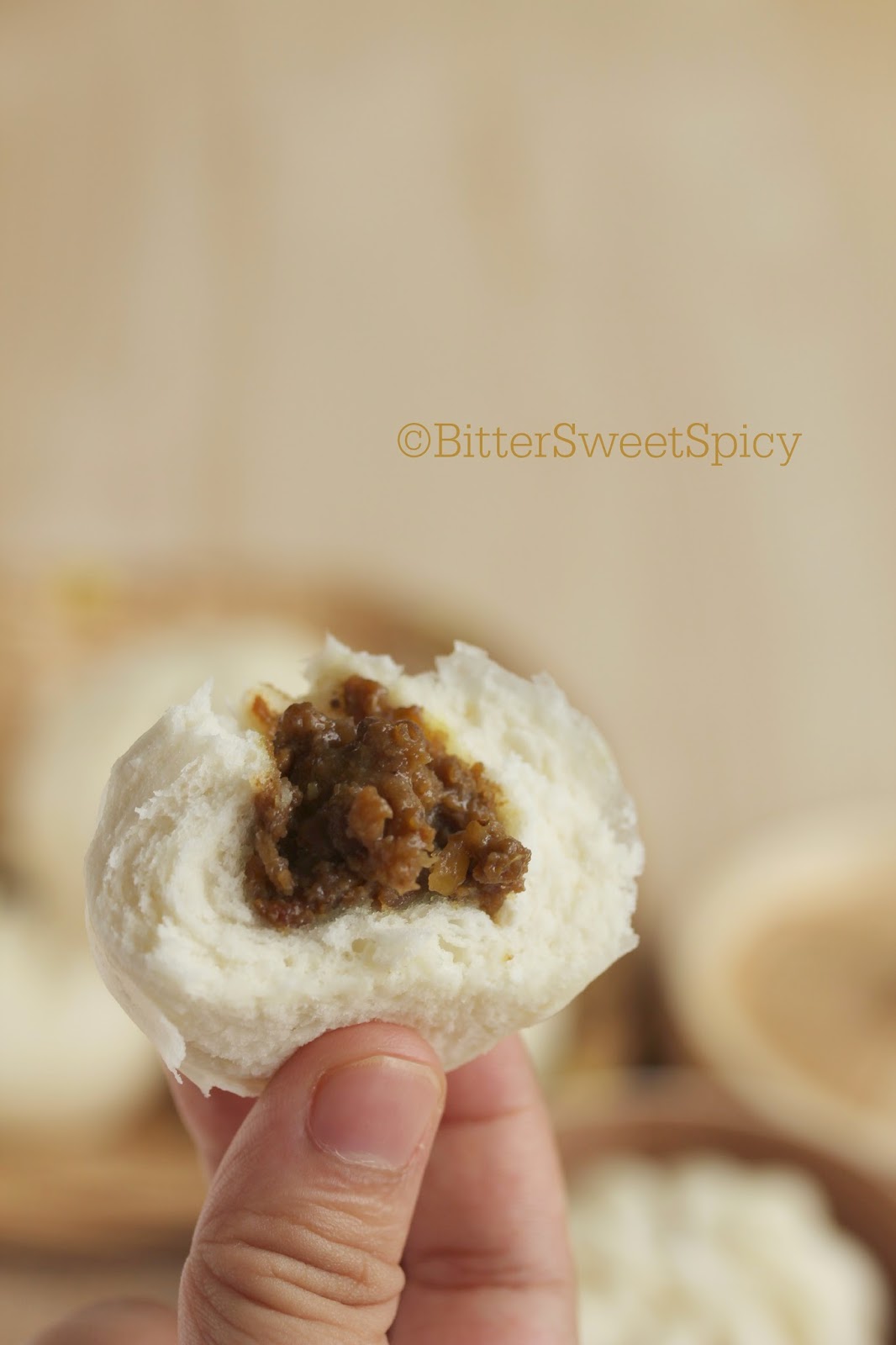 Combine all the ingredients in a bowl & mix until well blended.  Cover & leave in room temperature to ferment for at least 16 hours, up to 24 hours.

Recipe by Hamidah Rusdi, with some minor modifications.

I've seen many bloggers baking soft buns, the kind that we Asians like. One of the recipes that has been making its rounds is the Kopitiam Milk Buns that was shared by Sonia. Besides the plain version, she also made use of this recipe to make some curry buns. 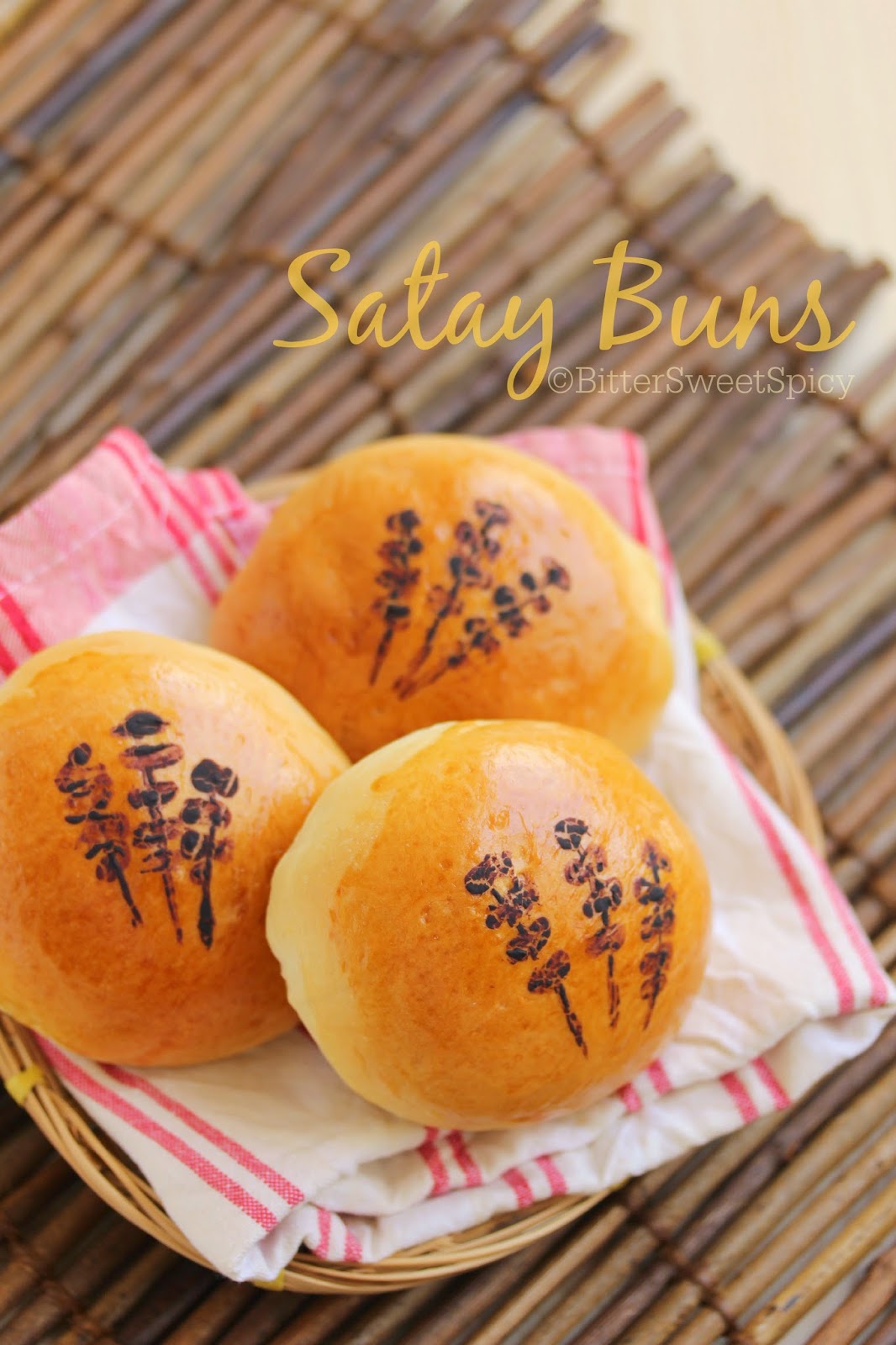 Her curry buns inspired me to bake some filled buns. But I decided to fill mine with beef satay filling. No wonder this bun recipe is so popular. The bun is so soft &, more importantly, it is so fragrant & so delicious! Big thumbs up for this recipe! And the satay filling just makes these buns so irresistible!! 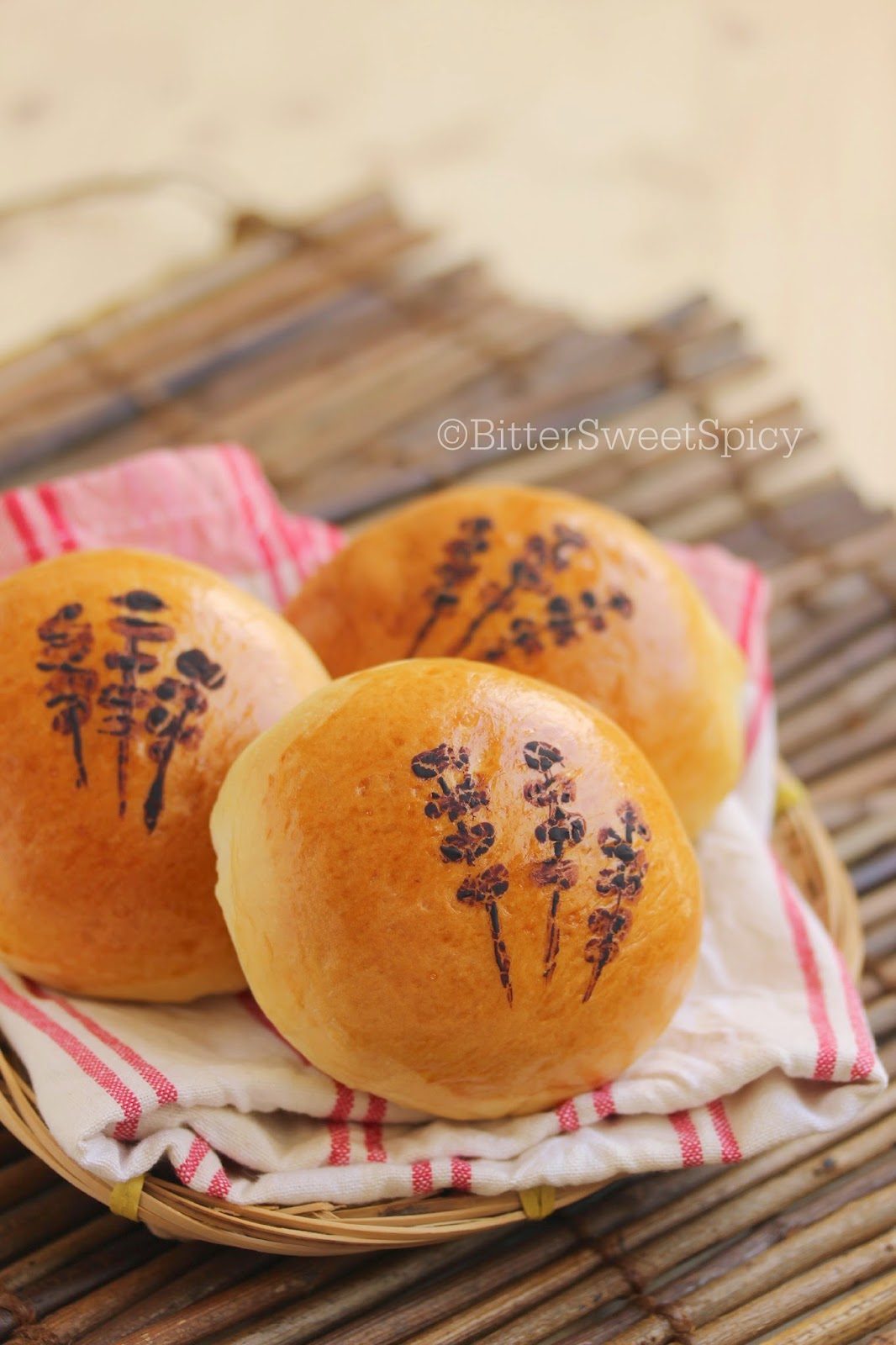 I was also inspired to decorate my buns by one & only Victoria. If you had been following her, you would have seen how she has been showcasing her creativity in her baking products. I can't draw well, so  nobody could figure out that I had drawn some sticks of satay on my buns. They all thought that they were some flowers or wheat! ^_^ 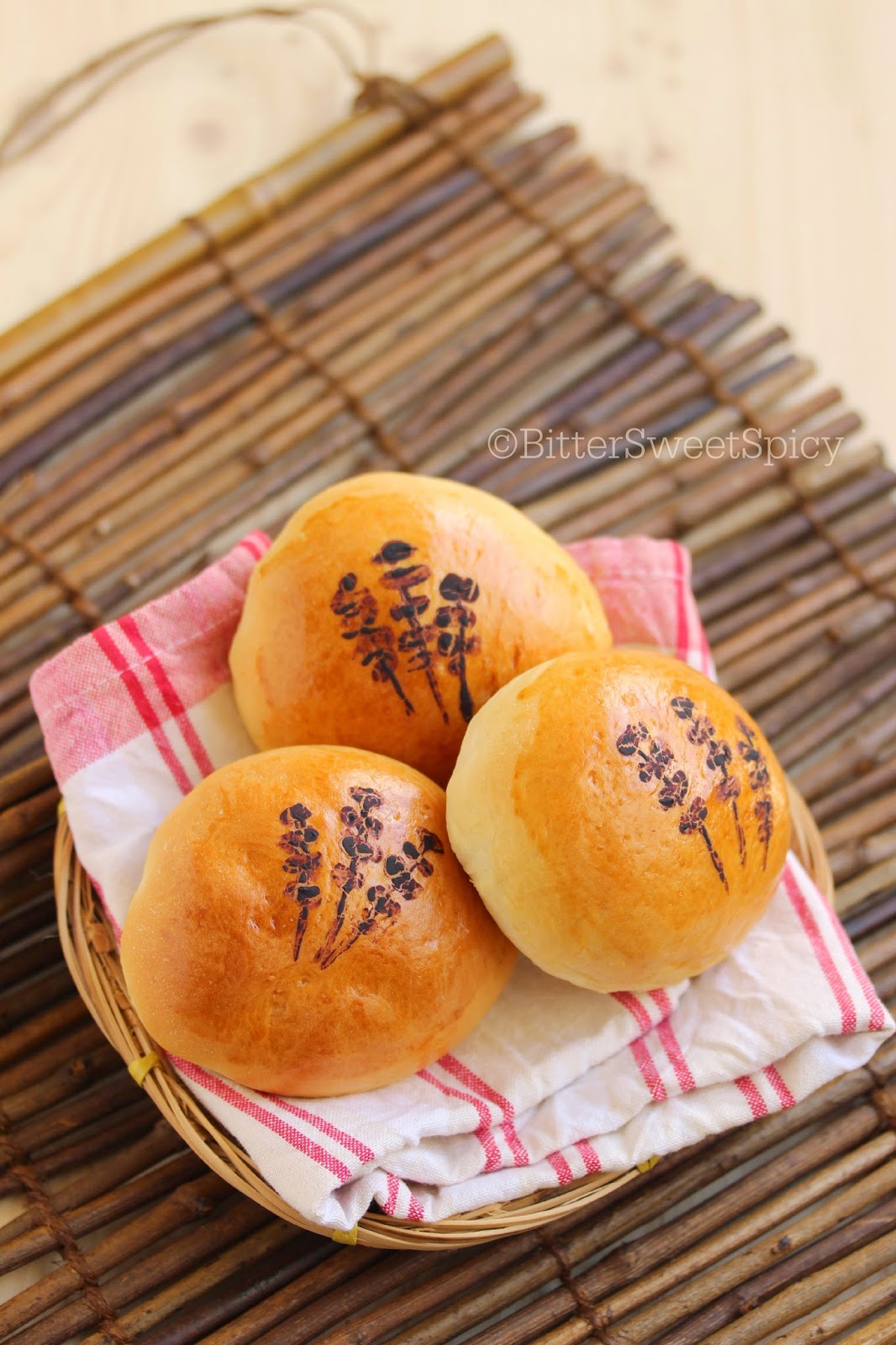 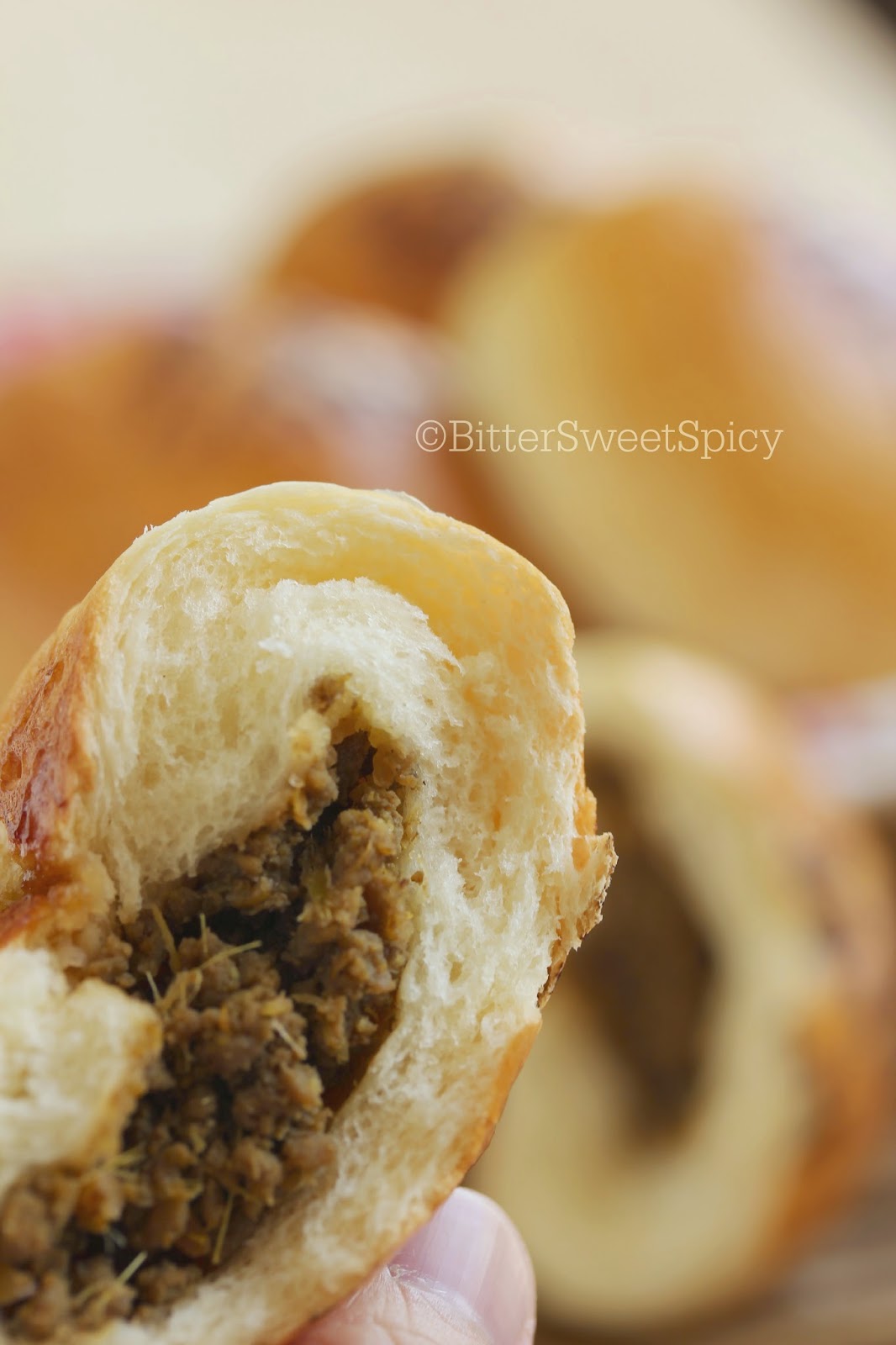 My daughter & I had our breakfast at KFC yesterday. I had my favourite porridge & the daughter ordered KFC's new addition, chocolate banana pancake meal. I took a bite of the pancake & was pleasantly surprised with the banana flavour. I'm not sure if real banana is added... if it's not, then the banana essence must be very good. 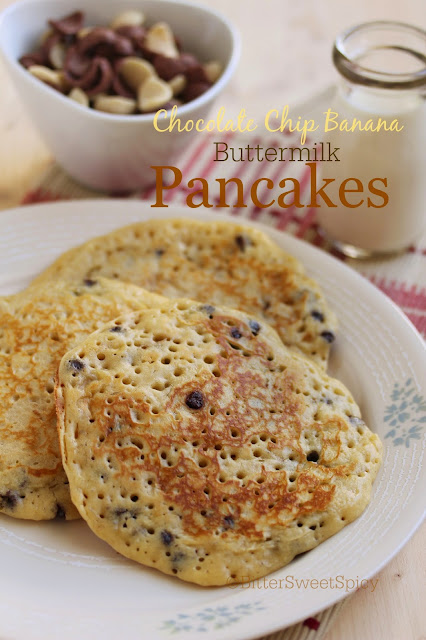 This morning, I was inspired to whip up some homemade chocolate banana pancakes. So I searched for a recipe & decided to use one from Food Network. Great recipe indeed... fluffy pancakes & the banana & chocolate combination was spot-on. They were so good, you could just have them on their own. My boy commented that eating them was  like eating pancakes with Nutella! Need I say more? 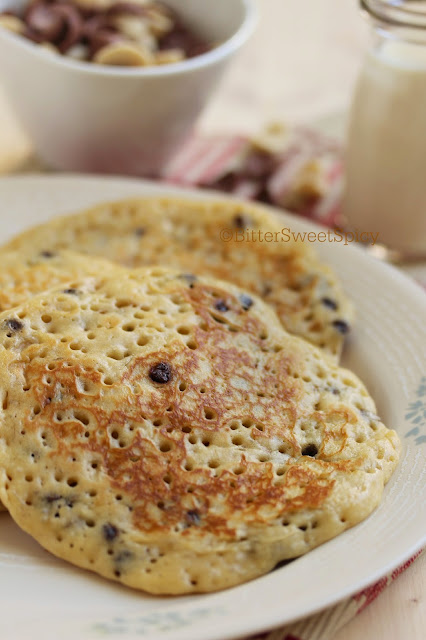 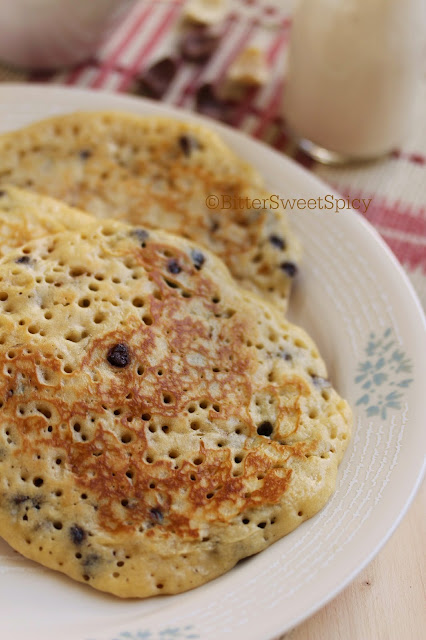 It's already almost halfway through November & the typical weather for the year-end has begun to show its true colours, literally..... After a hot & humid week, the sky has been quite gloomy for the last few days. I've been under the weather too... fever, hoarse voice, spinning head.... But I'm good, still managed to be up & about doing my things. :) 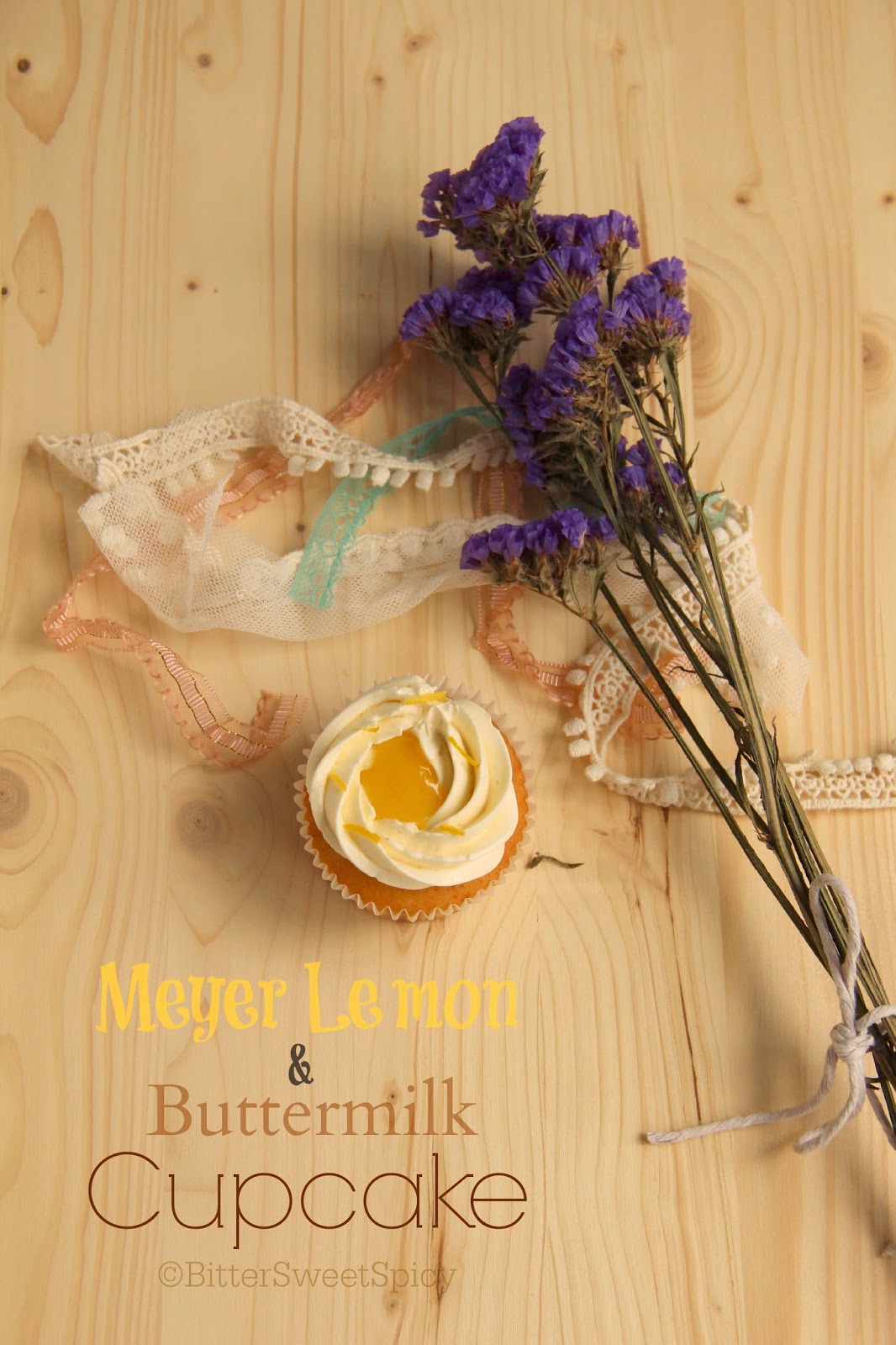 And one of the things that I managed to do was to bake some cuppies...  As if to brighten up the wet & cloudy days, I decided to bake some Meyer Lemon Cupcakes. Hehe, actually, I wanted to use up the remaining meyer lemons which had been in the fridge for a while. Bought a bag of them from Cold Storage as I was curious with the taste as compared to that of the regular lemons. Just like what I've read, meyer lemon does have a combined taste of lemon & mandarin orange. 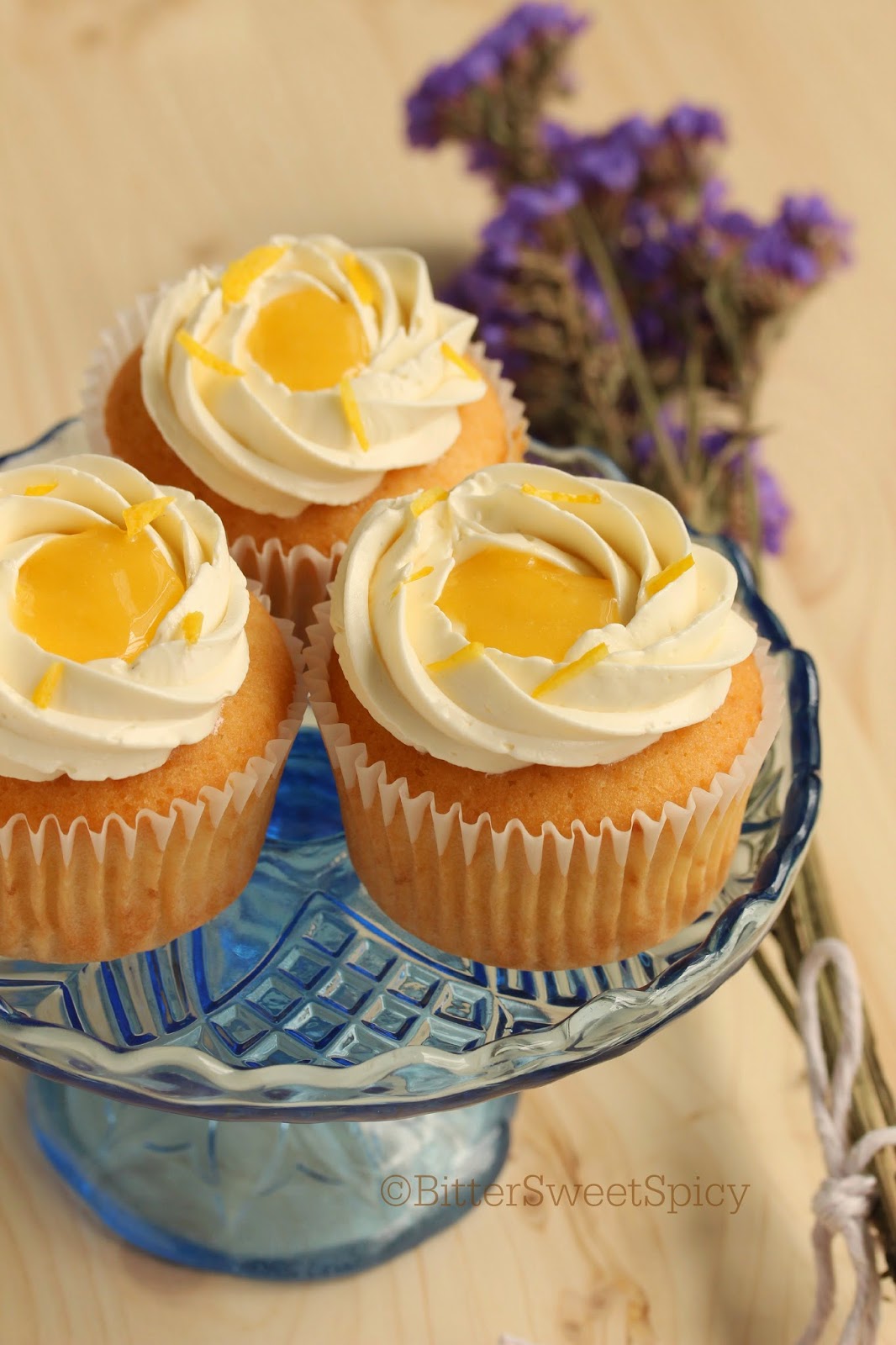 Believe it or not, this is my first time making & tasting lemon curd. As expected, it still retains its tanginess even though sugar & egg yolks are added. I love the tanginess in some food like acar or Mango Pickles, but meyer lemon curd...... maybe it's an acquired taste, it's definitely not love at first taste, haha! The buttermilk cake is good; it's soft & moist with quite loose crumbs & doesn't taste too sweet. The SMBC is great too, that's for sure. Still, the whole combination just doesn't sit well for me. I think  a cupcake has to be creamy, sweet &/or chocolaty. One thing for sure, these cuppies do look bright & sunny! 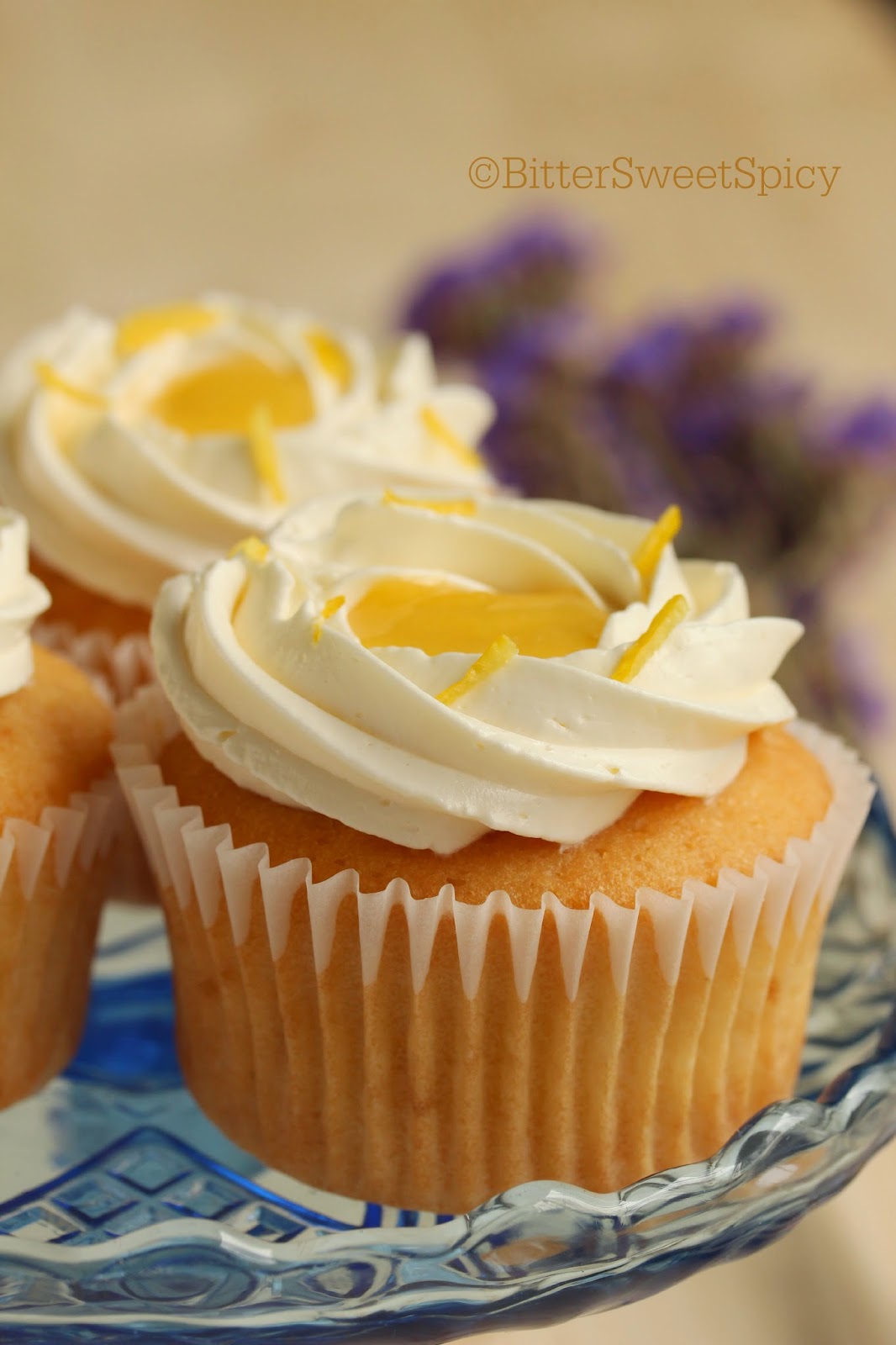 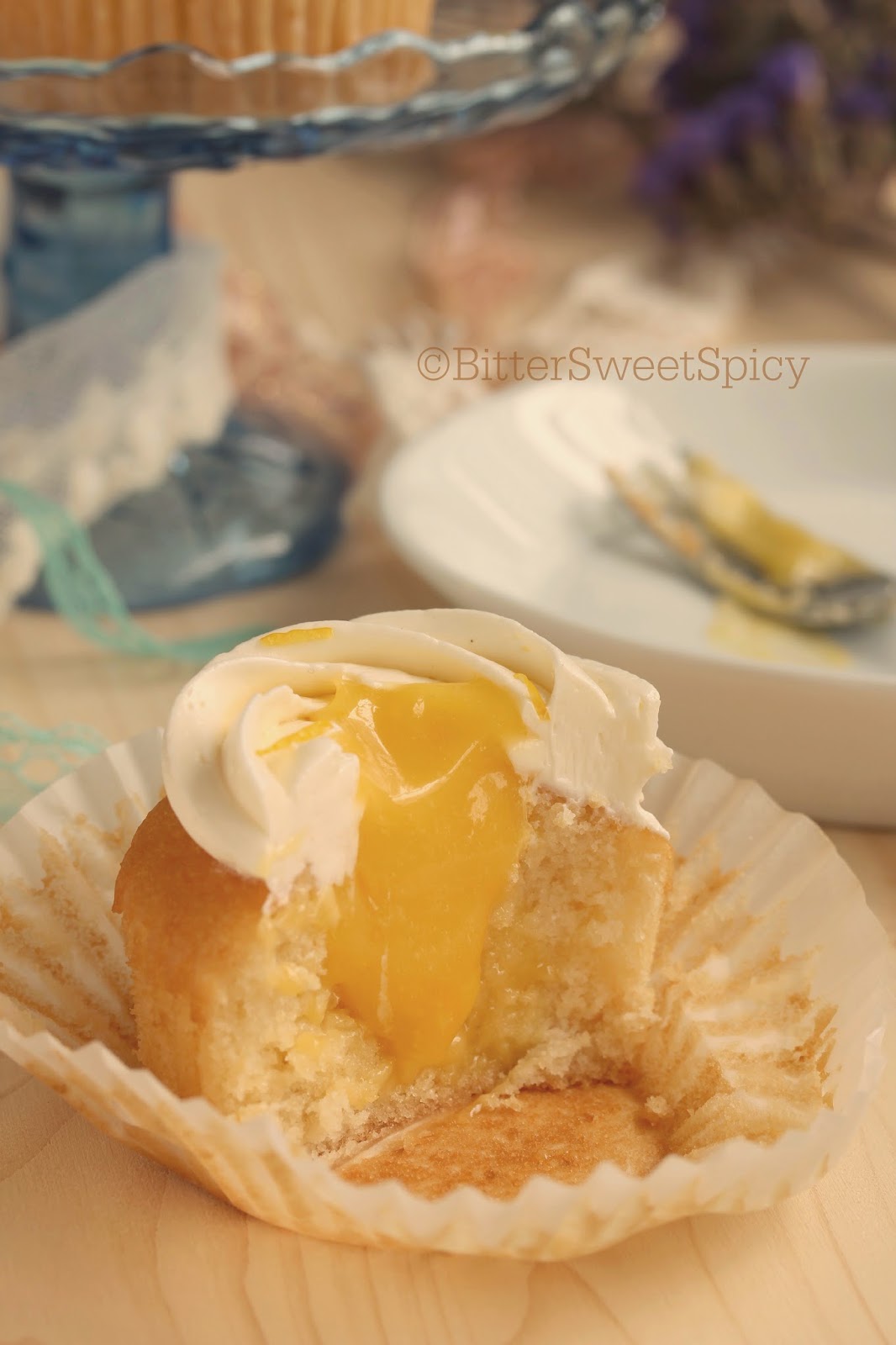 The above recipe is a slightly modified version of the Gula Melaka SMBC that I used for my Pandan Cupcakes. Do refer to Wendy's post for a detailed post on how to prepare Swiss Meringue Buttercream.

Notes & modifications:
I'm linking this post to the events Cook-Your-Books, no. 18 hosted by Joyce of Kitchen Flavours and "My Treasured Recipes #3 - Taste of Autumn (Oct/Nov 2014)" hosted by Miss B of Everybody Eats Well In Flanders and co-hosted by Charmaine of Mimi Bakery House. 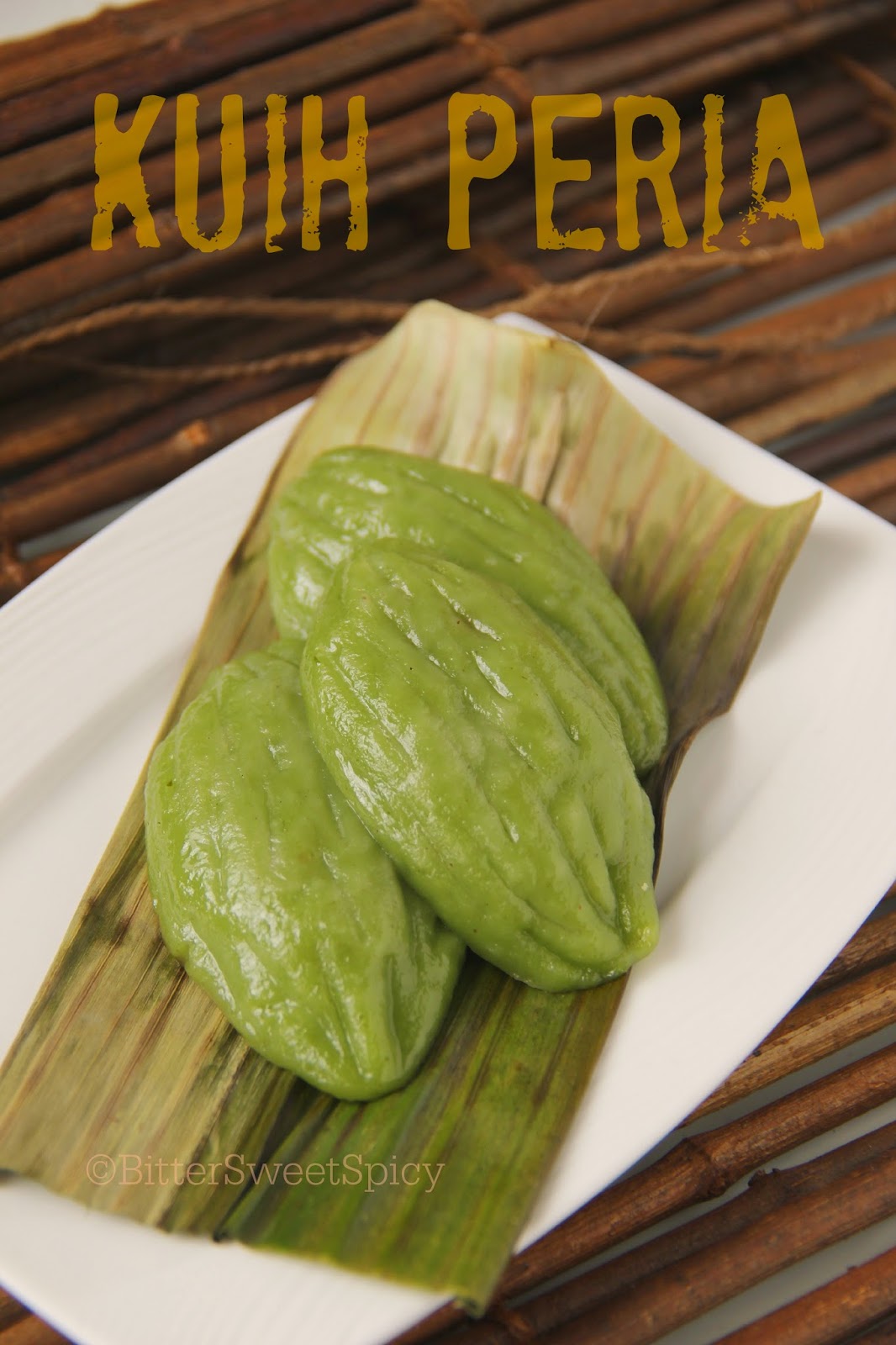 They are actually Kuih Peria or what the Indonesians call Kuih Perape.  Sweet & rich, they are quite similar to Kuih Angku, except they're shaped to look like bitter gourd & the filling is sweet grated coconut instead of mung bean paste. They really taste like Kuih Koci. I find them quite cute & if you were to serve them for a gathering, I'm sure it'll be an interesting topic of discussion! 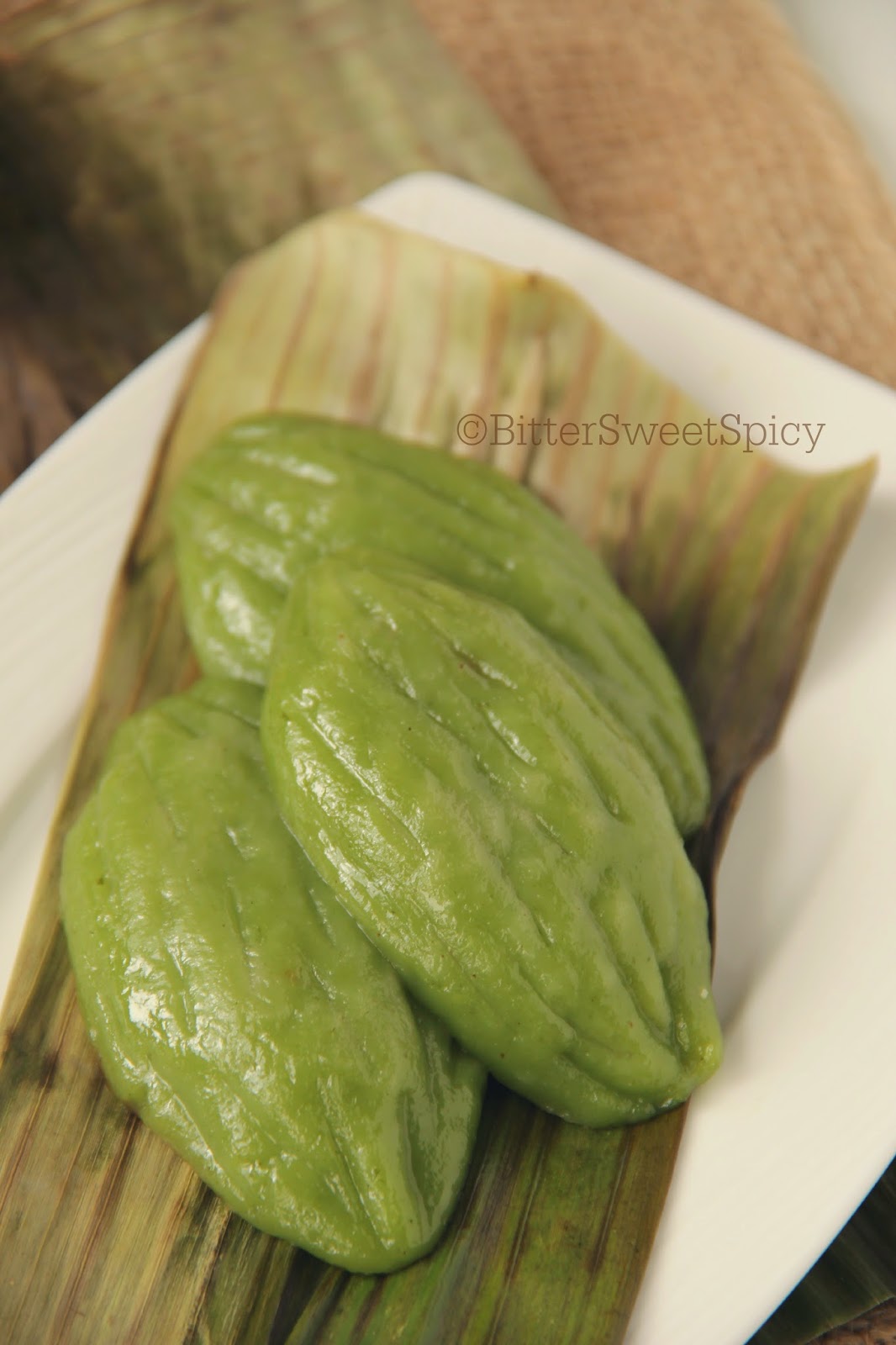 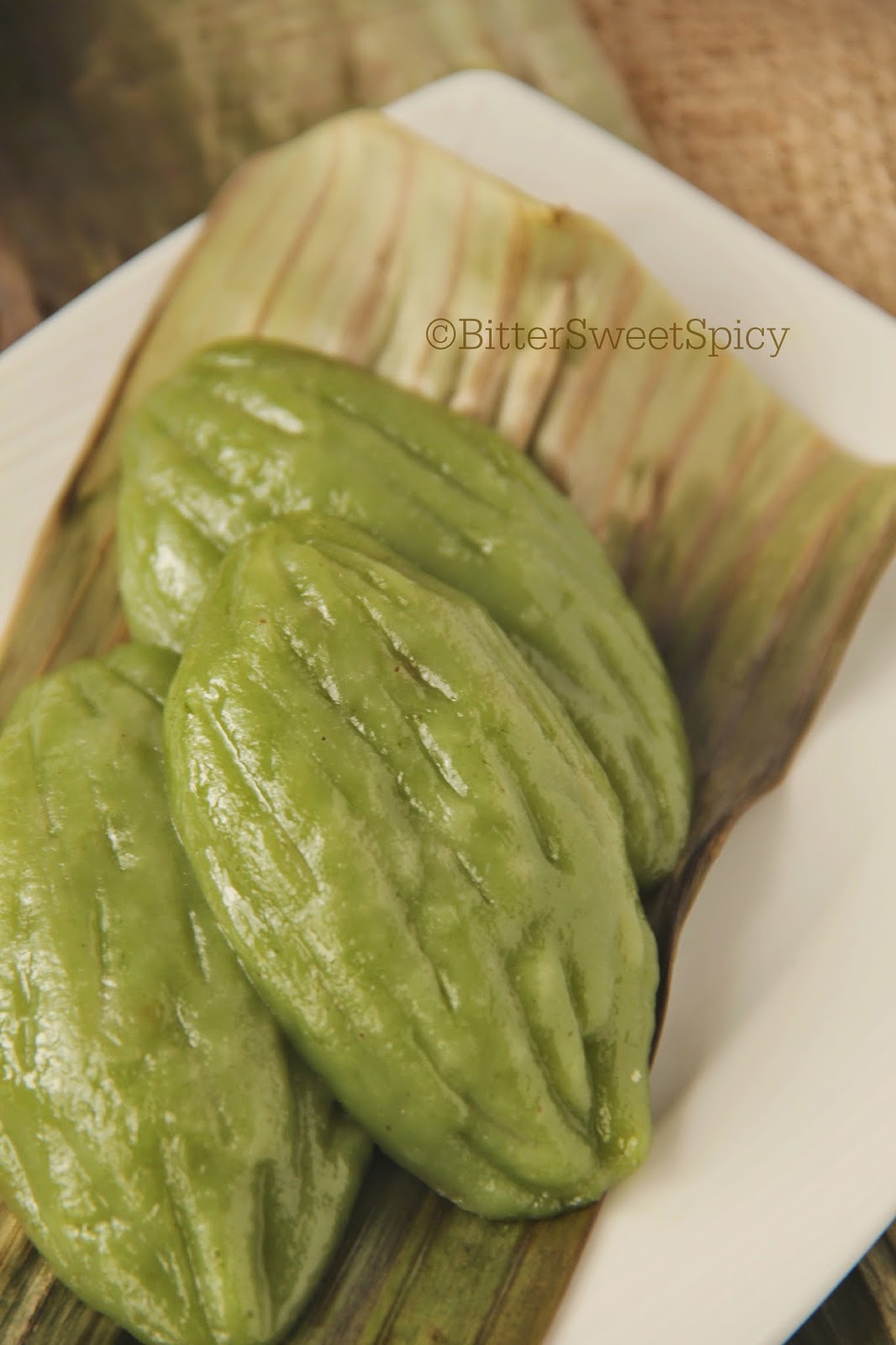 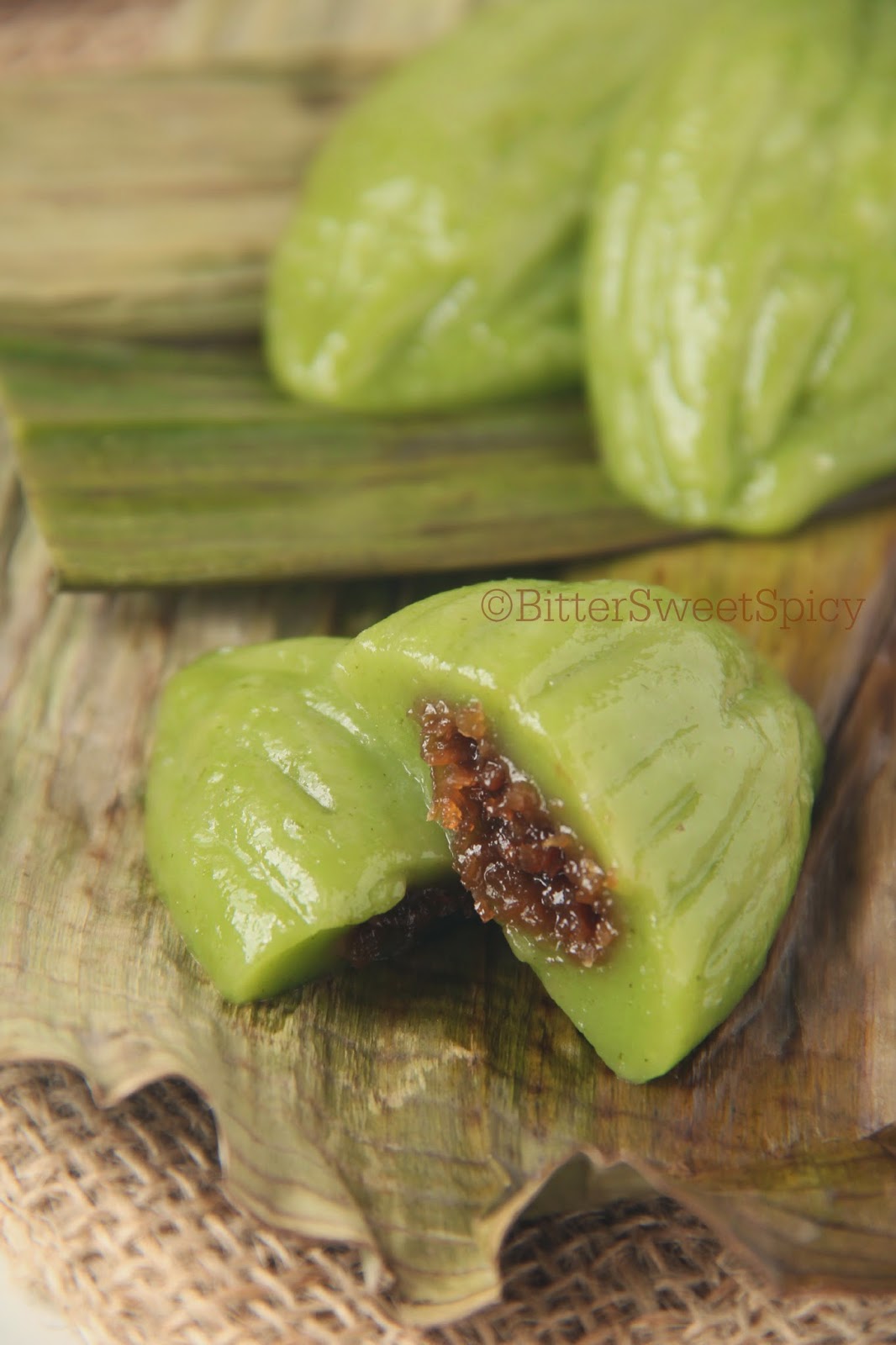 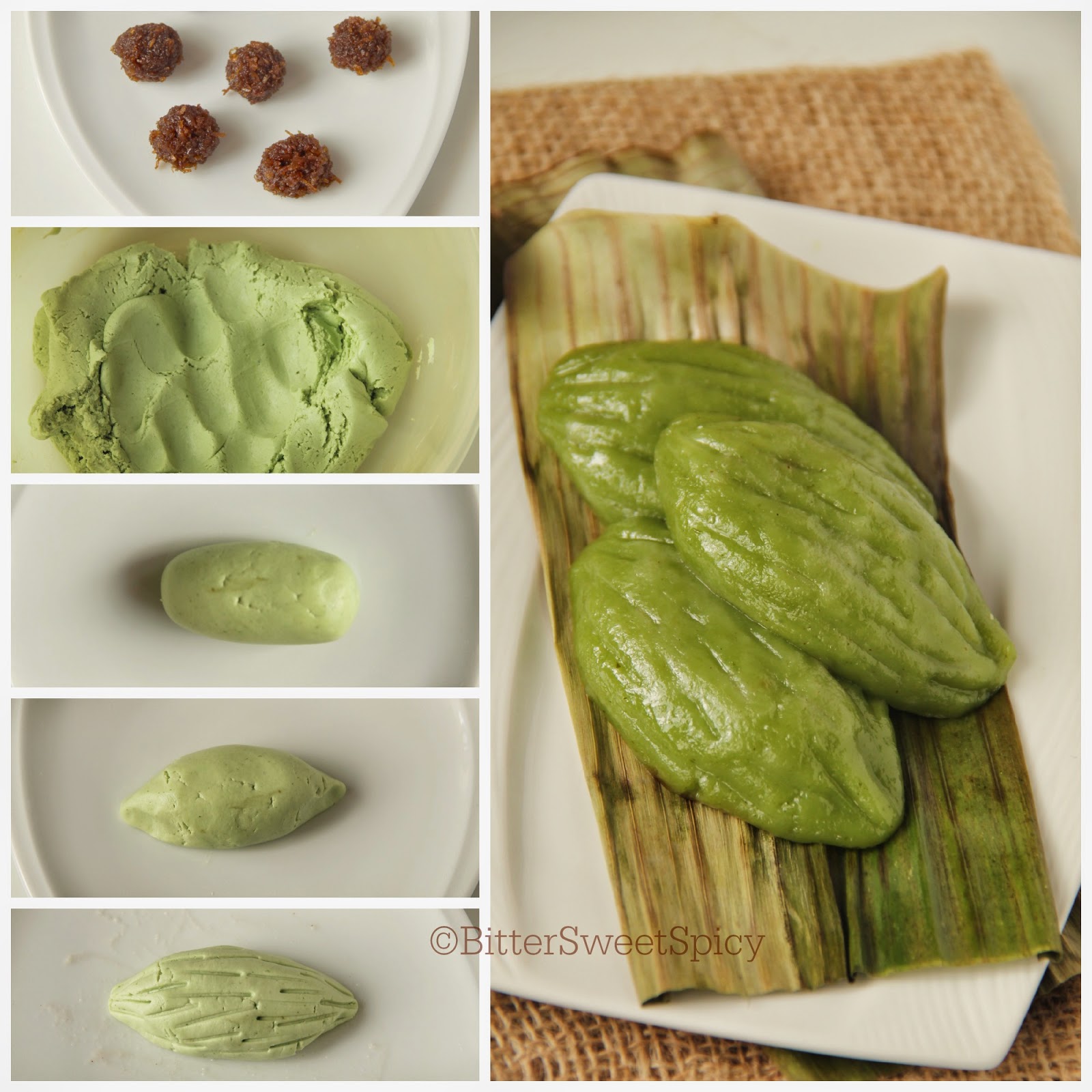 Combine water, gula Melaka, granulated sugar into a saucepan & boil the mixture. Strain & pour back into the saucepan. Add in coconut, pandan leaf & salt. Stir until cooked & almost dry. Set aside to cool.

COCONUT MILK WASH
50 ml coconut milk
1/8 tsp salt
Combine both ingredients in a saucepan & cook over low fire, stirring frequently, until it starts to boil. Set aside to cool.