My sister-in-law organised a barbecue a few days ago. So I had to think of what to bring along to the chalet. As usual, I took quite some time to decide what to make or bake. Every time I had to make the decision, I would have a list of questions in mind & weigh the pros & cons of bringing the thing that I had in mind... it just slowed down the whole process but I just could't help it... maybe it's the practice I had in school. The funny thing is, very often, I'd end up making the same thing. Haiz... 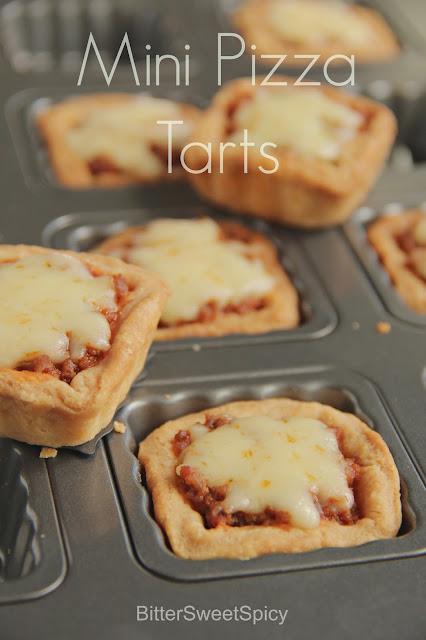 This time, I decided to make some mini pizzas, again....(except, this time, I used a different recipe for the crust.) Almost two years ago, I made Mini Pizza Pies as my contribution to a barbecue organised by the same SIL. Back then, the pies were quite a hit with the guests, especially with the kids. Come to think of it, who doesn't like pizza....? They were still a big hit this time around... they disappeared within an hour of the gathering! 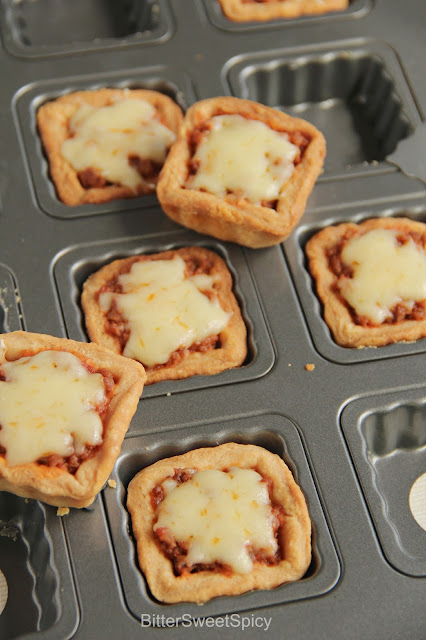 I also spent some time deciding which mould I should use. At first I wanted to use the medium disposable aluminium tart moulds but I found them too big for finger food. Then I thought of using the small ones but they were too small & shallow. In the end, I used my Chicago Metallic Bakeware Lift & Serve Single Squares, the same ones I had used before. I just love the pan. When I first saw it online, I thought it would be great for mini cheesecakes since the base is removable.  But so far, I've never used it for baking cheesecakes, just tarts. Nevertheless, it was a very good buy... I ordered 4 pans, all the way from the US & waited for more than a month for them to arrive since I opted for the lower shipping cost.  So,  I can make 48 minis in one go! 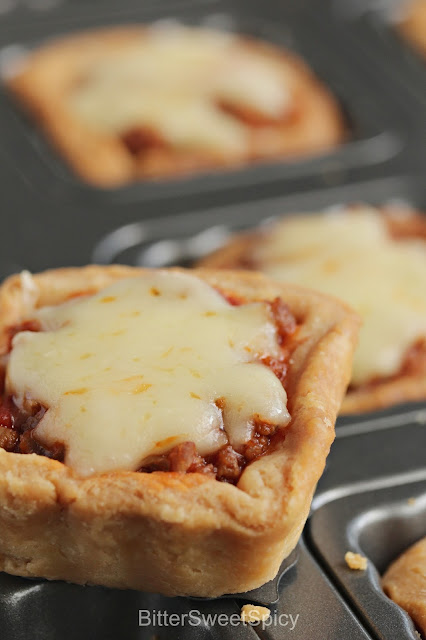 I'm  submitting this post to Aspiring Bakers No 35: A Palate For Pizza (September 2013) hosted by Joey of Little Accidents in the Kitchen. 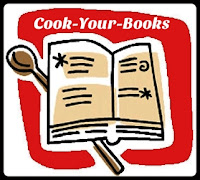 I'm also linking this post to Cook-Your-Books No 4 hosted by Joyce from Kitchen Flavours.

what a marvelous twist to pizzas

Hi Faeez,
Cute and delicious pizza! No wonder they dissappear real fast! And I like your baking pan!
Thank you for sharing with CYB!

Hi Victoria, thank you. Great idea for gathering, isn't it?

Joyce, they sure are delicious. I'll be making this more often for gathering. The baking pan is indeed my favourite!

This is so cute!!! What a great way to use this baking pan.